Christmas past and present

Get festive in the New Forest 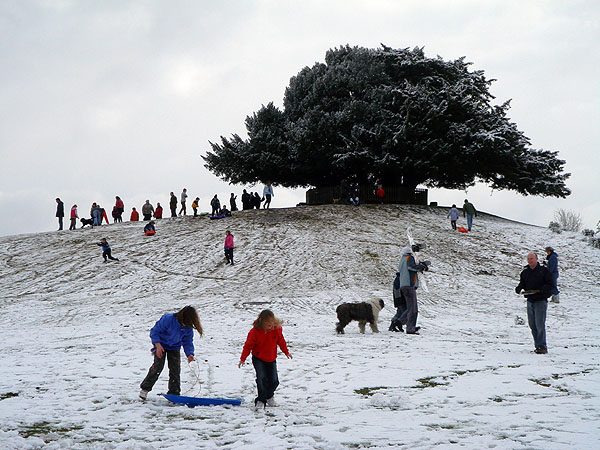 Some places are more Christmassy than others: Lapland, Germany with its festive markets, Bethlehem naturally. I think it is possible to make a case for the New Forest being in the top 10.

It is something to do with holly, log fires and bracing Boxing Day walks. These comforting yuletide traditions could have been invented for the New Forest.

The New Forest may not have many shepherds watching over flocks but it does have commoners and agisters keeping an eye on ponies, donkeys and cattle. Anyone who has ever watched a pony turning to prickly gorse for sustenance in the winter months can hardly balk at eating a few Brussels sprouts on 25 December.

One of the Forest’s traditional common rights, estovers, relates to cutting wood for fuel and has a distinctly Christmas feel. Although commoners who exercise this right are now provided with firewood from timber plantations to protect the ancient and ornamental woodland, it still sounds uncannily like ‘gath’ring winter fu-oo-el’.

The Forest is full of ‘real’ Christmas trees and those nice people at the Forestry Commission will even let you buy one at their seasonal sales.

Perhaps it is the tantalising prospect of crisp frosts or a covering of snow that can make the Forest truly magical at Christmas. Drivers struggling to work through this year’s early fall of snow may disagree!

The landscape of the New Forest, with its mixture of woodland and open heaths, trees and gorse, lends itself especially well to wearing a white winter coat. Add the Forest’s animals and it can be a classic Christmas-card scene: ponies dusted with snow, deer tiptoeing through frosty grass.

While we have had snow and hard frosts in recent years and weeks there is no guarantee that it will be ‘deep and crisp and even’ over the festive season. Did it snow more often in Christmas past? There is some evidence.

In the harsh winter of 1962-3 snow started falling on Boxing Day and did not thaw until March. New Forest ponies were in danger through lack of food. Seven feeding points were set up around the Forest with reports of 100 ponies visiting each. Approximately 28 tons of hay was distributed.

From Christmas Day to New Year’s Day 1928 the New Forest experienced some of its most severe snowstorms of the century with drifts up to 15ft high.

There was hard winter weather for 55 days in February and March 1891, while some New Forest people were marooned in their homes by snowfall in December 1886. Even further back in 1787 hundreds of deer perished in the Bolderwood area because of harsh winter weather.

Whatever the weather this year, enjoy your New Forest Christmas.