Ponies with more than one trick 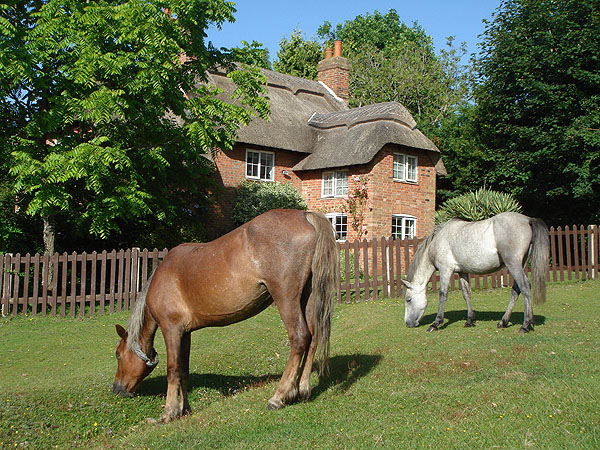 Lawnmower, cultural icon, photo opportunity, road hazard: the New Forest pony is all of these and more. Few animals are as closely associated with their home turf as the New Forest pony. Other places such as Dartmoor and Exmoor have indigenous ponies, but the New Forest version is in a different league.

There are around 4,000 ponies in the 220 square miles of the New Forest. It is difficult to spend time in the New Forest without seeing a pony. The pony is on practically every green space and even on postcards, tea-towels and road signs.

Yet for most visitors and many who live in the area the New Forest pony remains a mystery. Why are the ponies here? What do they eat? What happens to them? Why do they try to steal your picnic?

New Forest ponies are often described by the uninitiated as ‘wild’ because they roam freely in open countryside. In fact each pony is owned by someone known as a ‘commoner’ whose property gives them historic rights to turn out animals in the New Forest.

Ponies are sometimes called ‘the architects of the Forest’ because it is their grazing – not just today, but over centuries – that has helped to shape the landscape we know and love as the New Forest. The unique mixture of close-cropped ‘lawns’, ancient woodland and wide expanses of heath owes much to the eating habits of New Forest ponies. They nibble the grass as closely as the green on a golf course. They munch on gorse, brambles and holly in the winter months when the grass is less plentiful, creating a distinct ‘browse line’ at the height they can reach.

The economics of pony-owning in the New Forest are obscure. Ponies are sold between commoners within the New Forest and to buyers from outside the area at five-times-a-year sales held at Beaulieu Road. When they are not being landscape architects at home, the New Forest breed makes good riding ponies. However, there are also grants available to support the commoners’ and their ponies’ ‘stewardship’ of the New Forest landscape. Perhaps most importantly there is a strong sense of cultural identity and a wish to maintain the commoning tradition.

For the keen observer there are a couple of tell-tale signs that New Forest ponies are not as wild as they first appear. One of them might be described as a tell-tail sign. Many New Forest ponies boast rather natty tail-clipping designs in addition to brand marks made up of letters and shapes.

The system of commoning is administered by a Court of Verderers which employs a small team of stockmen-cum-wardens called ‘agisters’ to look after the ponies and other commoning animals (mostly cattle, donkeys and pigs) in the New Forest. Once a year, in the autumn, they round up the ponies for health checks or for sale.

At the same time they brand the ponies to signify ownership and clip the tail in a shape showing in which agister’s area the pony usually lives and as a receipt to indicate that marking fees have been paid by the pony’s owner. The fees help to fund the management and welfare service provided by the verderers and the agisters.

Although they take place in the heart of the New Forest, these activities go largely unseen by the general public. In the case of the round-ups this is intentional and partly for safety reasons. The round-ups are known locally as ‘drifts’ but this is a misnomer: they are nearer to Wild West stampedes and it is wise to stay out of the way.

There is an irony in the idea of people getting run over by on-rushing ponies because, for most of the year, ponies are far more likely to be run over by people in cars. Ponies have no road-sense. Dozens are killed or injured each year in spite of speed limits, road signs, reflective collars and awareness campaigns. The only sure way to reduce accidents is for drivers to slow down and give ponies a wide berth, especially at night or when the sun is low in the sky or while the foals are around.

So with the New Forest pony one person’s photo opportunity is another person’s road hazard. The fact that ponies stand around all over the New Forest at all times of the day and night and in all seasons posing for the camera is good for the tourism business. The fact that ponies often stand around in the middle of the road at all times of the day and night is not so good for any other business that involves people trying to get from A to B.

Only a couple of the most major roads in the New Forest are fenced. Why don’t they just fence the rest of it? For many this would destroy the natural, unspoilt, open landscape of the New Forest. The sense of wilderness and flavour of medieval England would be lost. The New Forest would be a collection of pony paddocks. It would be a costly and complicated exercise to undertake and maintain. And, besides that, the ponies were here before the cars and they have right of way. Perhaps most importantly the ponies are a huge part of what makes the New Forest special. The ponies and their landscape are the New Forest’s biggest attraction.

Ponies often seem to use roads to get from one favoured grazing spot or watering hole to another. And why not? If someone provides a smooth path wouldn’t you prefer it to uneven ground? Ponies can be attracted to roads when grit is spread in icy conditions, from their perspective turning them into a giant salt-lick! The prospect of food is another lure to the roadside.

For large, sturdy-looking animals New Forest ponies have a surprisingly delicate constitution. Almost everything apart from natural forage is bad for them. People are asked not to feed the ponies because they can become accustomed to human food and then begin disrupting picnics when they have been known to bite and kick in search of a sandwich. This may also draw them to car parks and roadsides and cause accidents. Green acorns that fall in the autumn are poisonous to ponies. Even grass-cuttings from the garden left out by accident can make ponies very ill.

If all of these health-hazards, along with biting flies in the summer and biting cold in the winter, make it sound as if life for the New Forest pony in the 21st century is a grim affair, don’t believe it for a moment. Compared with days gone by when the New Forest pony was sometimes used as a pit pony or a workhorse to pull the trap to market or to take children to school, today’s role as the star attraction for visitors in their natural habitat does not seem so bad.

New Forest ponies behave as if they own the place which, some might say, they do.